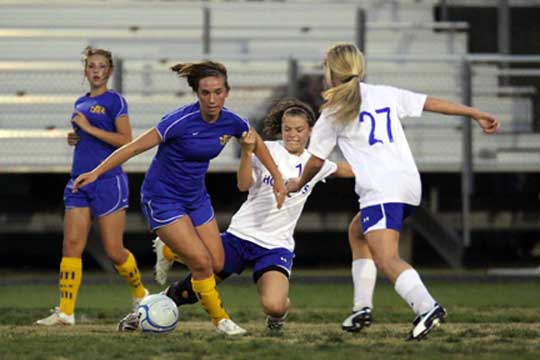 The Bryant Lady Hornets will make their third consecutive trip to the Class 7A State Soccer Tournament, opening this Friday, April 29, at 7 p.m., Rogers High School against Springdale Har-Ber.

Bryant secured the No. 3 seed from the 7A-Central Conference with a 3-0 win over North Little Rock that completed a season sweep of the Lady Charging Wildcats. Har-Ber is the No. 6 seed from the 7A-West. The two teams played on March 6 and the game went to a shootout before Har-Ber managed a 4-3 win. It was Bryant’s only shootout loss this season.[more] 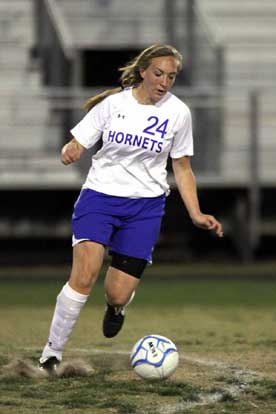 The Lady Hornets improved to 15-7 overall, 9-5 in conference play. They’ve won two games in succession and eight of their last nine heading into State.

“This got us on a little winning streak before going into the State tournament,” commented Lady Hornets’ coach Julie Long. “The girls set a goal to make it to the playoffs and they achieved that. Now they are working to make it past the first round. They are determined and playing with a goal in sight right now.”

Only once has a Bryant girls team won a game at State. That was in 2006 when they defeated El Dorado in the Class 5A State tourney.

“The girls came out knowing they had to take care of business to keep our three seed, and that’s exactly what they did,” stated Lady Hornets’ first-year coach Julie Long.

It was Senior Night for Bryant as Emily Smith and Haley Montgomery were honored. Both have missed most of the season due to injury.

“The girls fought hard,” Long noted. “Everyone wanted to win that game for our seniors. It was a big game and they knew it. Emily came out and played extremely well.”

Bryant built a 2-0 lead in the first half.

“Emily played a ball through to Tarra Hendricks and Tarra finished it off,” Long recounted.

“The second goal was later in the first half,” she continued. “It happened when McKenzie Adams dribbled through the back line, took it down to the corner and played it across. Maggie Hart was there to finish it and put it in the back of the goal.

“The third goal came off of an assist by Katie Moore,” Long said. “She played the ball wide to Lexie Balisterri. Lexie took the shot of her life and it hit off the near post and went in. It was a beautiful shot.

“I thought that all the girls stepped up and played very well,” the coach mentioned. “They were first ot the ball and found ways to put the ball in the back of the net. My defense still did great. Overall, it was a great game for us.”