Lady Hornets third in meet featuring six other 7A squads

RUSSELLVILLE — Bryant’s Kayla Scott edged Rogers’ Ashlyne Silcott in the 300 hurdles and the Lady Hornets’ 4×400-meter relay team earned top honors on Friday at the annual Cyclone Relays at Russellville High School. The Lady Hornets were third in a challenging 16-team field that include seven Class 7A squads.

Besides the top three in the standings, Class 7A teams that competed also included North Little Rock, Van Buren, Rogers Heritage and Cabot.

Foot also scored in the triple jump, taking fourth at 33’8”. In addition, she contributed a leg to the 4×100 relay team on a 50.99 clocking, which earned fourth-place points. She joined Robinson, Burt, and Daelyn Young.

Taylor McKinney’s discus toss of 99’1” was second only to the 103’5” thrown by Russellville’s Carter Murphy.

Bree Hood picked up second-place points in the pole vault, clearing 8’6”. Conway’s Jadah Meyer got over at 11’10”. 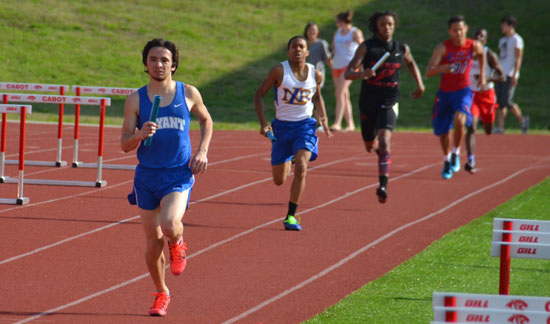