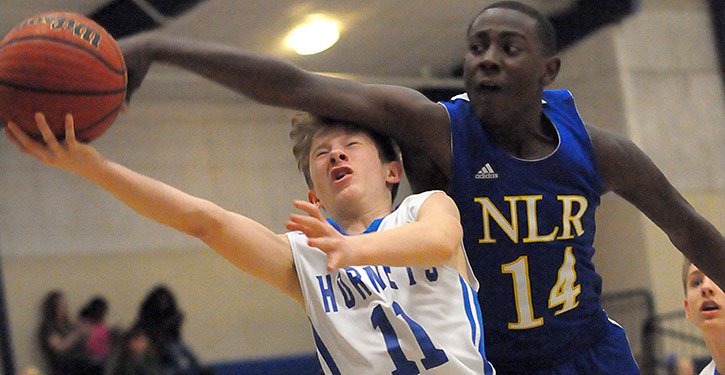 Foul trouble and the physical defensive play of the North Little Rock Charging Wildcats eighth-grade team proved to be the difference in the end as the Bryant Blue Hornets of Bethel Middle School absorbed a hard-fought 36-29 loss at home on Tuesday night.

The Hornets stayed close until late in the game. They led 9-7 after a quarter and held an 18-17 edge at the half. But they scored just 4 points in the third quarter as North Little Rock pushed ahead 24-22 going into the final stanza.

“I was very proud of the heart our kids showed,” said Bethel coach Steve Wilson. “We were able to play even through the first half.

“It was a very physical game, but I felt our kids adjusted the best we could and didn’t back down,” he added. “We did suffer from some foul trouble, especially with our inside players. But we got great help off the bench from Carson Nagle, Evan Lamb and Jackson Verdell. Elijah Thompson had one of his best games of the year. I hope we can build on this for Thursday.”

The Hornets travel to Hot Springs Lakeside on Thursday.

Thompson led the Hornets with 14 points including 11 in the first half. James Billingsley added 8 and Lamb had 7.