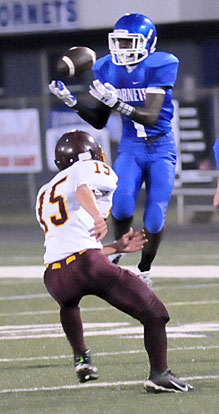 Jakalon Pittman leaps up for a pass reception he turned into a touchdown. (PHoto by Kevin Nagle)

Every season, as the coaches for the Bryant Hornets freshman team led by Kenny Horn try to mesh players from Bryant Middle School (Bryant White) and Bethel Middle School (Bryant Blue), one of the primary concerns is the offensive line. As Horn has explained in the past, the blocking techniques and intricacies at the freshman level are far more involved than at the middle school level (and, of course, further along at the high school varsity level). It takes a while for them to not only learn those many additional facets but to work together too.

On Thursday night, the Bryant Hornets piled up 231 yards rushing including 132 by running back Diante Woodson and 96 by quarterback Michael Jones. But it was the work of the offensive line that had Horn excited after his team, faced with team with imposing size, dashed to a 33-8 victory over the Lake Hamilton Wolves freshman team.

“I’ll give credit to Michael Jones and Diante Woodson,” Horn stated. “They had big nights but I’m telling you, (offensive linemen) Kobi Riffe, Bryce Thomas, Preston Kyzer, Zak Kemp and Joseph Wyllia — we can’t get it done without those big guys. They whipped those (Lake Hamilton) guys tonight. They got to us a couple of times but, for the most part, we stayed on them and whipped them. We handled them.

“We didn’t have to throw it a lot,” he mentioned. “The ground game was working. (Lake Hamilton is) big up front. We’re big up front. It was a good match-up but our guys came out and got the job done.”

Jones was 3 of 6 passing for 47 yards. The Wolves managed 189 yards of offense including 111 yards on the ground by power back Randall Nichols. But Bryant held them out of the end zone except for a 21-yard touchdown pass on a third-and-19 play midway through the second quarter.

“Our defense is pretty nasty,” Horn stated. “We had two starters go out in the first six minutes but the guys we put in, they stepped up. Christian Harp almost picked a ball off and (Parker) Littleton made quite a few plays. 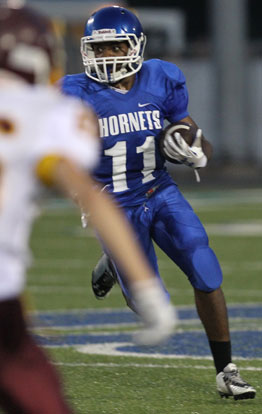 “I thought we played well overall,” he asserted. “We played clean. I’m impressed with how clean we’ve been playing, penalty-wise. We haven’t been hurting ourselves. I know last week we fumbled the ball two times but, this time — we ran the same play this week as we did last week and didn’t fumble it one time tonight.”

The victory improved the Hornets to 3-0. They’re now 1-0 in the Central Arkansas Junior High Conference.

“It’s a big win anytime you can beat Lake Hamilton,” the coach declared. “I liked the way we played today. We’ve improved.”

Bryant scored on each of its first two possessions to build a 12-0 lead. The opening march was a short one thanks to Cameron Vail’s 58-yard kickoff return. Two plays from the 24 didn’t net a first down but Jones’ third-down keeper picked up 11. From the 8, it took two plays. Woodson scored from the 5.

A try for two failed, however, when a pass was dropped in the end zone.

Nichols took a pitch on a power sweep and rumbled 35 yards on Lake Hamilton’s first snap on offense. Jakalon Pittman made a touchdown-saving tackle. Three plays later, the Wolves faced a fourth-and-1 at the Bryant 43 but when quarterback Utah Aiken tried to sneak for it, James McClendon and Antonio Todd broke through to drop him for a loss.

The Hornets took over on downs at their own 44 and Jones went to the air. His deep pass to Tristan Calhoun was under-thrown but when Calhoun made a bid to come back and catch it, he was interfered with. The 15-yard mark off set up Woodson’s 41-yard touchdown run that made it 12-0 when a try for two failed again.

James Polite intercepted a pass moments later but, this time, Lake Hamilton held Bryant to a three-and-out, thanks in part to a pair of dropped passes. 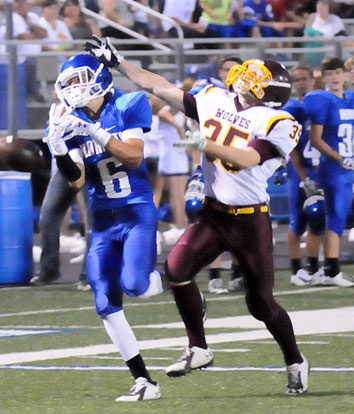 After a punt, the Wolves put together their scoring drive, ignited by a 27-yard blast from Nichols. Aiken completed all four of his passes on the drive including the TD strike to Degen Stacks. Juan Jackson, the Wolves’ H back caught the other three throws including a 13-yarder that converted a third-and-6.

Nichols powered in for the two-point conversion and it was 12-8 with 3:47 left in the half.

That was just enough time for the Hornets to put together an answering drive for points. The 10-play, 76-yard drive was highlighted by a 15-yard scamper by Woodson, an 11-yard pass completion from Jones to Mathew Sandidge and a 16-yard run by Woodson after Jones had been sacked for a loss of 8 yards.

A play later, Jones fired a pass to Pittman who laced his way through the secondary for a 27-yard touchdown with 10 seconds left in the half.

Jones ran in the conversion this time and it was 20-8 at the half.

On the second half kickoff, it appeared that, while running a reverse return, the Wolves used a forward lateral but no penalty was called and they set up shop at their own 36. Nichols pounded for 10 yards but then, the Hornets defense held, resulting in a punt.

The Hornets took complete control of the game with an 80-yard drive in eight plays. Woodson had runs of 13 and 23 yards, Jones completed a 9-yard pass to Calhoun and the drive reached the 33. On a fourth-and-3 there, Jones, keeping off the read-option, was hit in the backfield, but shook off the tackler on his way to a determined 10-yard run and a first down.

On the next play, he kept again, spun through a pair of tacklers at the 10 and scrambled into the end zone for a 23-yard run.

This time, Luke Welch kicked the extra point and it was 27-8 with 1:11 left in the third quarter.

Thanks to a 16-yard pass from Aitken to Jackson, Lake Hamilton drove to its 47 but three incomplete passes followed including the ball that Harp nearly picked.

The Wolves punted and Bryant took over with 6:25 left in the game. The Hornets’ eight-play, 74-yard drive for a final score put the finishing touches on the victory. Back-to-back 20-yard gallops by Woodson set the stage. Though Jones was dropped for a loss by Lake Hamilton’s big William Burgess, he got that back and more with a 27-yard dash to the 8. Two plays later, he scored from the 2 with 1:46 left. 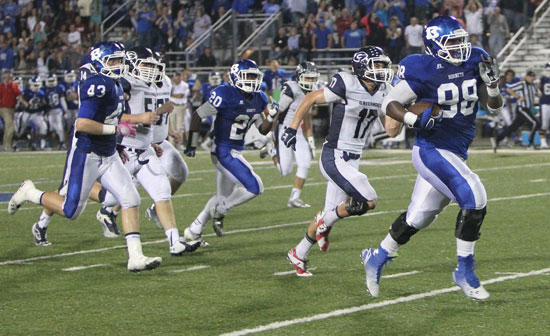