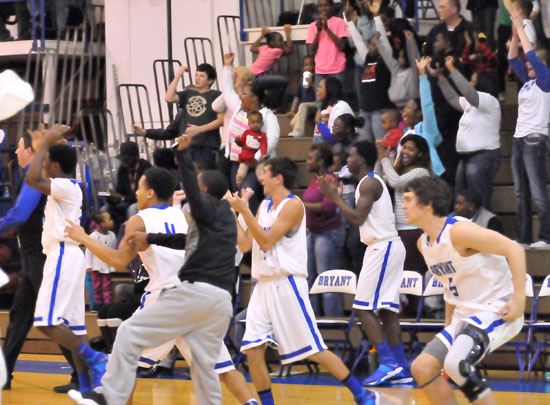 For the third time in four home conference games, it came down to the last shot for the Bryant Hornets. Make it two. 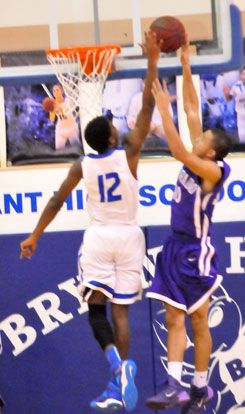 But the El Dorado Wildcats’ Jalen Cunningham couldn’t get either to fall and, with several players from both teams scrambling onto the floor to get to the rebound off the second shot, time ran out and the Hornets celebrated a wild 60-59 win.

Though the Hornets came into the game 5-1 in league play, atop the standings, and El Dorado entered with a 1-5 mark, at the bottom of the standings, the game couldn’t have been much more competitive. It was tied nine different times.

The last tie was 59-59 after the Wildcats, playing with desperate intensity, had taken a 59-58 lead on a basket by Kennan Hicks with 2:54 to play. Moments later, Bryant sophomore Kevin Hunt, who set a new career high for the second game in a row with 19 points, hit a free throw to knot it.

It was typical of the Hornets’ night that he made one and missed one. For the game, Bryant was 12 of 24 from the stripe.

With a chance to regain the advantage, the Wildcats suffered a turnover when forward Kawon Love was cited for an illegal screen.

The Hornets, with the floor spread in hopes of creating some driving lanes and use up some time, got the ball to senior C.J. Rainey, who had come through with a three-point play to provide the winning margin in their 44-43 win at home against J.A. Fair on Jan. 17. Rainey drove to the hoop but missed a contested shot but somehow came out with the rebound. With 1:46 left, Cedarrian Crosby was fouled on a drive up the baseline and he snapped the deadlock with a free throw. 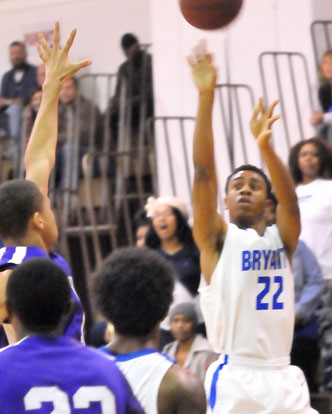 Romen Martin fires up a 3-pointer. (Photo by Kevin Nagle

El Dorado ran its offense but sophomore Dee Stewart misfired and Crosby rebounded. The Hornets worked the clock for a while before Romen Martin looked like he had a lane to the basket down the baseline only to have Hicks step in a draw a charge.

The Wildcats called a timeout with :45 left to set up a potential game-winning play. They turned to Cunningham who had scored a game-high 25 points to that point. He got a look with just under 30 seconds left but missed it. In the scramble for the rebound, Jaquaylon Willis came away with the ball. He got it back to Cunningham who dribbled near the time line as the seconds dwindled down under 10. His second shot missed as well, leading to the scramble under the basket that ended the game.

“I don’t know how it keeps coming down to one point,” marveled Hornets coach Mike Abrahamson. “What a strange deal. We’ve had so many close games this year. We’ve won a lot of them. 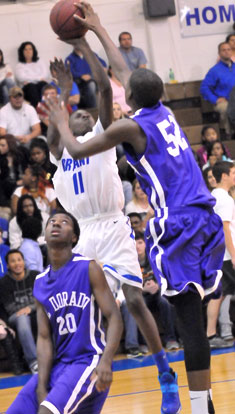 “Overall, I’m pleased but we can do better,” the coach asserted.

Abrahamson also praised the Wildcats, saying, “You’ve got to respect that. They’re 1-5 in the conference and they come in, trying to work their way out of the hole. They’re not giving in. They’re still playing hard for the coach. They played extremely hard and (Cunningham) was unstoppable at times. We knew how good he was and we tried to do things to slow him down and we couldn’t. To his credit, we couldn’t. They really played like they were 5-1.”

The game was rugged under the boards, an advantage for the bigger Wildcats.

“They’ve got some strong kids that play football and basketball and are super athletic,” Abrahamson acknowledged. “It was tough.

“At the beginning of the game, they’re shooting and there’s eight people in the lane,” he mentioned. “We’re not clearing the lane. I don’t think we ever cleared the lane like I’d like to but it got better. Guys were checking guys then going up and getting the ball. Cedarrian, Kevin and C.J. got some big rebounds.”

The win was the sixth in a row for the Hornets who retained their share of the conference lead at 6-1. The lone team to beat them is their next opponent, the Bryant Panthers, who visit Bryant to kick off the second half of the league season on Tuesday, Feb. 4. 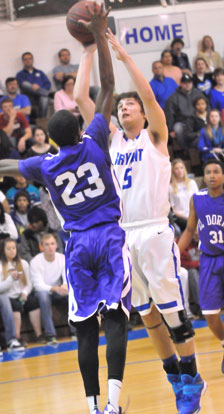 “I want to see us prepare in practice to win as hard as we play in the games to win,” he related. “I’m not saying that we’re taking it easy. It’s a natural tendency when you win some games to have a little let up. The great teams really prepare with the same intensity and focus as they do when they play. I’d like to see us improve in that area as we go into the second round of conference.”

To go with Hunt’s 19-point effort, Bryant got 15 from Rainey, 12 from Crosby and 10 from Martin. Senior Greyson Giles was hampered by foul trouble before eventually fouling out, added 2 points as did sophomore Kris Croom.

Bryant got out to a 5-0 start on a basket by Crosby off a nice feed from Rainey and a three-point play by Hunt.

But El Dorado came back to take a 9-6 lead. Rainey and Cunningham traded basket then Stewart and Croom did the same. But when Cunningham hit a 3 with five seconds left, the Wildcats had a 16-12 lead going into the second period.

Martin drove for a bucket and Hunt hit a running jumper to tie it at 16. Stewart and Rainey scored to knot it at 18.

It stayed that score for a while before Czar Perry made a steal and layup to put El Dorado back on top. It was tied at 20 and at 22. Cunningham snapped the second of those knots with a pair of free throws but when Martin nailed a 3, Bryant had the lead.

Rainey and Crosby combined to force a turnover and Crosby scored. After a free throw for the Wildcats’ Dadraques Harris, Hunt hit a jumper in the lane and the Hornets led 29-25 at the half. 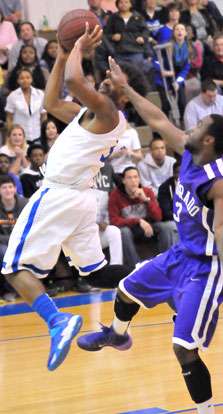 C.J. Rainey (3) reaches back to take a shot. (Photo by Kevin Nagle)

El Dorado took the lead when Cunningham hit a 3 with 5:33 left in the third quarter to make it 34-33. Rainey’s drive put the Hornets back up. C.J. Jefferson drove for a basket then Rainey hit a free throw to tie it at 36.

But Jefferson scored again and, at the other end, took a charge. Stewart cashed it in and, once again, Jefferson took a charge. But, moments later, Cunningham was caught taunting the Bryant student section and, as a result of the technical, Rainey hit a free throw.

But the Hornets were unable to take advantage of the subsequent possession and the Wildcats maintained the lead until the final minute of the quarter. It was 48-43 before Martin drained a triple and, after an El Dorado miss, Rainey converted two free throws to tie it at 48. And when the Wildcats suffered a turnover with :10.8 to go, Rainey’s flying jumper with :01.8 left, put the Hornets back on top going into the final stanza.

Crosby scored off a feed from Rainey to give the Hornets a 4-point lead and, after Cunningham countered with a short jumper, Hunt drove into the lane, scored and was fouled. His free throw made it 55-50 as the Hornets reclaimed their early-game margin.

With 6:54 left, Cunningham scored on another drive into the lane but, as it turned out, that was the last time he would score. Crosby countered but, after a timeout, Stewart’s three-point play and a layup by Hicks had it tied up again, 57-57, with 3:31 to go.

Rainey hit a free throw to put Bryant back on top but Hicks scored to give the Wildcats the edge. Hunt tied it with a free throw with 2:39 left, setting up the dramatic finish.