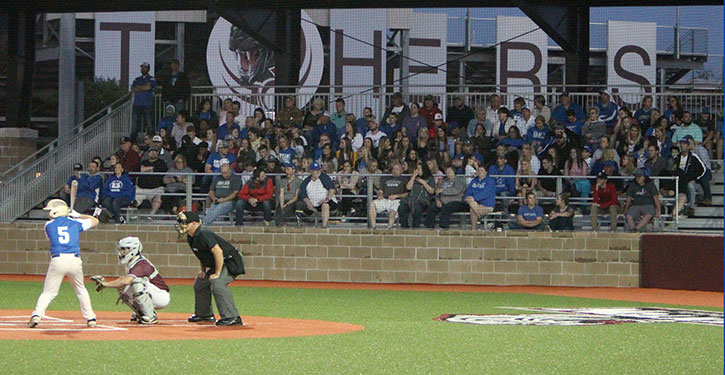 BENTON — With three games in three days and two of them conference battles against the teams on their heels in the 6A-Central, the Bryant Hornets took on the rival Benton Panthers on Thursday night before an overflow crowd at Benton’s beautiful new Everett Field and saw their 16-game winning streak stopped. The Panthers held on for a 4-3 win by squelching Bryant rallies in the sixth and the seventh innings in the inaugural Big Red Classic.

It was the first time Benton has beaten Bryant in baseball since March 18, 2014, when they were in the same conference. The Hornets had won four in a row in the series.

It was just the third loss in 27 games this season for Bryant.

Senior lefty Colin Morrow pitched five innings of shutout relief then got the final out with the potential tying and lead runs on base in the top of the seventh.

Aidan Garrett, Jaden Woodbright and Logan Easterling each had two hits for the Panthers who improved to 17-5. The decisive run came after Easterling opened the bottom of the sixth with a triple then scored on a sacrifice fly by Caleb Easterling that made it 4-2 at the time.

On the mound, Dillon worked five innings, allowing three runs, two earned on seven hits with a walk and five strikeouts. Braden Knight pitched the sixth in relief and surrendered a run.

Though Dillon came into the game with an 0.98 earned run average in 14 1/3 innings, he hadn’t pitched in a varsity game since April 9 against Conway.

Head coach Travis Queck was trying to save pitching for the league games at Cabot on Friday and at Little Rock Catholic on Saturday.

“It is what it is,” he said of the circumstances. “I felt confident. I think our guys felt confident with Dillon. And he battled up there. He did a good job. It wasn’t the best, but it was good enough to win. He deserved more offensive support. We didn’t provide it for him.”

The Panthers, coming off a doubleheader sweep of J.A. Fair in conference play and facing a league game with Hot Springs (two hapless opponents) on Friday had their best pitchers ready for the game. Hard-throwing right-hander Peyton Pallette got the start but struggled with his command.

The Panthers took the lead initially in the bottom of the first. Garrett drew a one-out walk and scored when a throw back into the infield got away after Woolbright doubled. Woolbright wound up at third. He scored when Easterling looped a single to right.

The Hornets answered in the top of the second. Pallette walked Cade Drennan and Jake Wright. With one out, Lawson Speer, running for Drennan the Bryant catcher, tagged and went to third on a fly to right by Gage Stark. With Dillon at the plate, Wright took off for second and got caught in a rundown. Speer raced home, and Wright wound up getting to second when the Panthers didn’t execute the rundown.

Moments later, Pallette balked and Wright was awarded third base. Walks to Dillon and Coby Greiner loaded the bases for Logan Chambers who greeted Morrow with a soft liner to left to make it 2-2.

But the Hornets left the base loaded as Noah Davis flew out to center and it turned into a pitchers’ duel.

“Youth, at times, got us,” said Queck. “I think some of us, at times, maybe got a little selfish, trying to lift something and get it out of here instead of sticking to the plan and getting it to the next guy. When you get comfortable in a win streak, that tends to happen. It shouldn’t happen. It’s not an excuse but it seems to happen.”

Dillon fanned two in a 1-2-3 home second then Morrow worked around a two-out walk in the third.

A single by Dillon with one out in the fourth was wasted. Ryan Riggs, running for the pitcher, moved up to second on Greiner’s groundout but was stranded when Chambers bounced out to second.

Garrett singled with one out in the bottom of the third but when Woolbright singled, he was thrown out trying to get to third from short right field by Bryant’s Logan Grant.

In the fifth, Davis led off with a walk, one of seven issued to the Hornets in the game, but Austin Ledbetter couldn’t get a sacrifice bunt down and wound up bouncing into a doubleplay.

In the home fifth, Michael Allison led off with a single to center. Pallette sacrificed him to second then Garrett’s second single drove home the tie-breaking run.

Bryant threatened in the top of the sixth. With one out, Grant reached on an error. With two out, Dillon slapped a double down the right-field line. Coby Greiner hit a grounder to deep short that Garrett fielded. It looked like Greiner might beat out an infield hit and pick up an RBI but Riggs, running for Dillon, tried to reach third on the play instead of freezing at second and Garrett was able to throw him out at third to end the inning.

Knight gave up the triple to Easterling to start the bottom of the sixth then retired the next three batters, thanks in part to a diving stab of a liner by Ledbetter at third. The second out, however, was the sacrifice fly.

In the top of the seventh, Davis worked another walk and Ledbetter drilled a single to left with one out. Both moved up on Cade Drennan’s roller to second. Wright followed with a hot grounder to third. Pallette picked it but his throw to first was dropped by Woolbright allowing Wright to reach and Davis to score. Ledbetter held at second, so the Hornets had two on and two out. But Morrow got Grant to pop out to Garrett in shallow center to end the game.

Another rout for Sox at 15U Babe Ruth State tourney