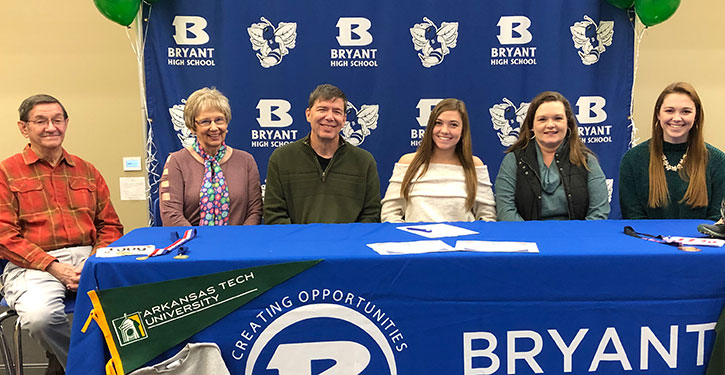 Three years ago, Abbie Patton never would’ve even dreamed it.

Oh, she might’ve dreamed of earning a scholarship one day, getting to play at the next level. But it would’ve been in soccer.

On Friday, Dec. 14, however, Abbie Patton, the daughter of Scott and Janet Patton, signed a letter of intent to continue her academic and athletic career in cross country at Arkansas Tech University in Russellville.

Just two years into her cross country career at Bryant High School, Patton developed into the Lady Hornets’ top runner, leading the team to the 6A-Central Conference championship and on to the Class 6A State meet.

Meanwhile, this spring as an outside midfielder for the Bryant soccer team, which reached the State finals last season, she’ll be part of the effort to bring a State title to BHS.

“I looked into some out-of-state schools a little bit,” Patton said. “They were a lot smaller than Arkansas Tech though and I’d also been looking at schools for soccer. I didn’t know what I was going to do.

“I went to Arkansas Tech and I met the team and the coach, and I was really interested,” she continued. “They gave me an offer I could not deny. It was really exciting. I had no idea this was going to happen.”

She said she was already interested in the school for academic reasons.

“I want to be a physical therapist, (study) exercise science, something like that,” Patton said.

She added, “It’s close to Fayetteville. My sister’s in Fayetteville. And it’s not that far from home but it’s still a good distance. So, I can get my space, but I can come home and see my family. My parents can come up and watch me run.”

“I remember the first time I met Abbie two years ago,” said Bryant cross country coach Keith Dale. “She tried out and Coach (Steve) Oury and I looked at each other and went, ‘Where in the world did she come from?’

“So, we started talking and, sure enough, she was a soccer player,” he continued. “Never in my wildest dreams would we have gotten such a great cross country athlete out of soccer. Granted, soccer produces a lot of great athletes. In fact, soccer is often the basis for a lot of our cross country kids. They run cross country in the fall and they make a very smooth transition into soccer because it takes a lot of endurance to play on the soccer team.

Regarding her decision to try out for soccer at the start of her junior year, Patton said, “I told some of my soccer teammates, ‘I love running. I think I’m going to try out for cross country.’ They said, ‘No, you’re not.’ They were like, ‘You don’t want to do that.’ ‘No, I really do.’

“Sometimes after soccer practice I’d just go run,” she explained. “It was something I enjoyed. It was kind of like a stress reliever kind of thing.

“Competing is a whole other thing,” she acknowledged.

“I just went out there and I think in tryouts I finished second,” Patton recalled. “I was thinking, ‘Okay. That’s not too bad.’ I didn’t realize how fast I could be.

“When I signed up, I didn’t know where it was going to take me,” she allowed. “I figured it would at least keep me in shape.”

As a junior, Patton’s season was cut short by a bout of mononucleosis.

“That was really disappointing,” she acknowledged. “So, this year, when I got a full year, I was able to improve so much.”

“She’s been our number one runner for almost every meet we had this year,” Dale noted. “She set her personal record at the conference meet, 21:17, which was, by far, a minute better than the P.R. that she had.”

That was good for fifth place overall in the league meet.

“It has been a joy to watch Abbie grow in her love of the sports, both soccer and cross country,” Dale said.

Running in that last meet, at State, made her ponder it further.

“It just made me realize how I didn’t want to be done with it,” she said. “I thought, ‘This can’t be my last meet.’ That was before I committed. Then God just kind of opened up those doors for me.”

“We were very grateful to have Abbie the last couple of years on our cross country team,” Dale concluded. “She’s been an outstanding leader. She’s been an inspiration to a lot of our younger athletes. And I wish her all the best at Arkansas Tech.

“I know her coach, Coach (Tom) Aspel,” he added. “He and I have been friends for many, many years. He helped me with coaching cross country, gave me a lot of pointers. He’s a great, great man who loves to see all of his athletes improve both academically and athletically.”