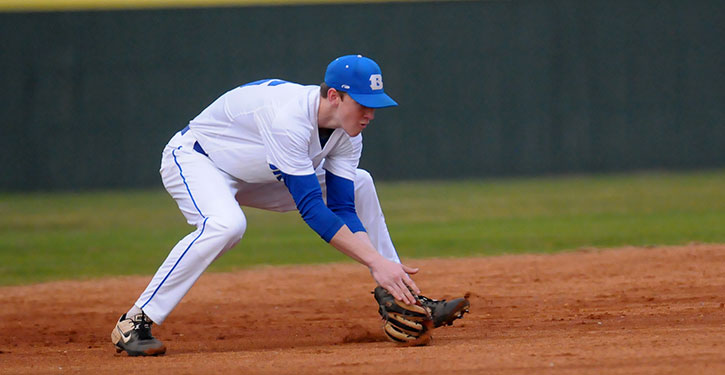 Hot Springs Lakeside’s star right-hander Ethan Bates pitched a six-inning perfect game and, with five runs batted in on a triple and a homer, led the Rams to a 15-0 romp to spoil the Bryant Hornets’ season-opening game on Monday night at Bryant High School Field.

Junior right-hander Will Hathcote stayed with Bates pretty much pitch-for-pitch through four innings. He walked a double in the second but pitched around them. A lead-off walk came to naught thanks in part to a fine running catch in left-center by Blaine Sears for the final out of the frame.

Hathcote struck out the side through the heart of the Rams’ lineup in the fourth. In the fifth, he got the first out on a grounder to Jackson Parker at short. But then Chris Killian slapped a single to right for the first hit of the game.

A walk on four pitches to number nine hitter Brennan Browning brought Hathcote’s pitch count to 71 and head coach Travis Queck brought on side-winder Slade Renfrow to face Bates, who had grounded to second and struck out against Hathcote. On Renfrow’s first pitch, Bates plugged the gap in right center for a two-run triple.

Before the inning was over, the Rams had plated nine runs against four Bryant pitchers.

“I think we had 15 freebies (in the game),” Queck said, pointing to nine walks (one intentional), two hit batsmen and five errors by his club. “If you look back over the course of this game, anytime those guys got on, they got into scoring position. Early on, we got them out but, from then on, we did not.”

In the sixth, two singles, a walk and three errors all came before Bate belted a three-run homer to make it 15-0.

Ethan Bates, meanwhile, only went to a three-ball count twice. Late in the game, he picked up a couple of stellar plays from third baseman Jordan Villas. The first one was a diving stop robbing Parker of a hit. The second was an over-the-shoulder catch running away from the infield in foul territory on a pop by Gavin Burton, which ended the game in the bottom of the sixth.

“We knew going into the game how good Ethan Bates was,” Queck said. “We tried and talked about not putting ourselves in a situation to allow him to beat us. But, when you walk the nine-hole two times, we were definitely giving him a chance to beat us.

“Hathcote did a dang good job of attacking him the first two times,” he added. “But it was the third time that got us.”

The Hornets will travel to Waxahatchie, Texas for a series of games in an annual classic-style event this weekend, starting on Friday. It’s a trip many past Bryant teams have made, returning home a better team.

“We’ve got to go back to the drawing board, there’s no doubt,” Queck stated. “I haven’t lost confidence in these guys, but we’ve got a tough row to hoe. We’ve got to work inch by inch and row by row — and keep plugging away.

“We need to go down to Texas and figure it out and get some momentum behind us,” he added. “And find some guys that are team players, that are going to figure out how to scrap and fight and grow.
“We are young,” the coach asserted — even more so now that returning start Austin Ledbetter has been ruled out indefinitely with an injury. “That’s not an excuse but we have a group that hasn’t been in a situation like this.”