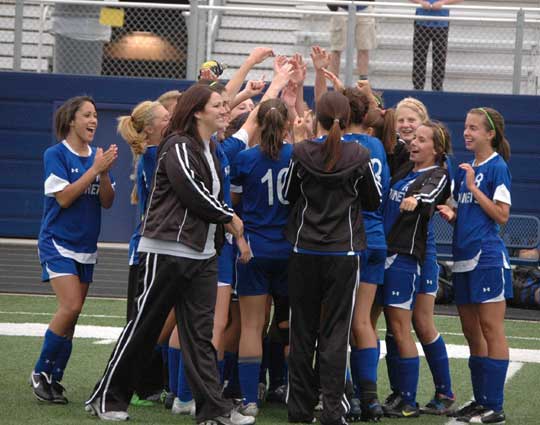 ROGERS — During the regular season, if the Bryant Lady Hornets got an opponent to a shootout, they were usually golden. They’d pump one penalty kick into the net after another after another, keeping the pressure on the opposition to match them.

So when, in their first two games of the Class 7A State Tournament, their contests went to shootouts (after finishing in a tie through regulation and two 10-minute overtimes), it figured to play right into the Lady Hornets’ hands . . . er, feet.

Though it wasn’t as cut-and-dried as usual, they found a way to get past Springdale Har-Ber in the first round late Friday night then Fort Smith Southside on Saturday evening as they advanced to the semifinals of the tournament, a win away from playing for a State championship.[more] 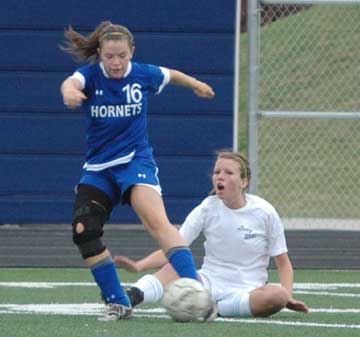 The Lady Hornets, the No. 3 seed, are the last team standing from the 7A-Central Conference. They’ll take on Fayetteville, the No. 4 team from the 7A-West on Monday, May 3, in one semifinal while the West’s top-seed Bentonville takes on third-seeded Rogers.

The winners will play for the title on Saturday, May 8, at 10 a.m., at the University of Arkansas in Fayetteville.

“My girls have played the best soccer they’ve played all season long,” acknowledged Julie Long, who’s in her first year as Bryant head coach. “That’s what you want right now at the end of the season. They’re not going to go down without a fight. I don’t care who we play. 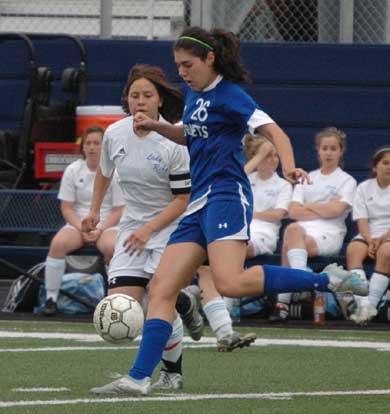 “They’ve fought through,” she added. “We’re not necessarily scoring but we’re getting the job well enough that we can finish with a win. We’re possessing the ball more than our opponents, for the majority of the games. Both of those games, the girls fought and fought and fought. There wasn’t a person out on the field that doesn’t deserve some praise because every one of them stepped up and played the best that they could.

“Beating Southside was a huge win,” Long noted. “They’d only lost three games and the only team up there that had beaten them was Bentonville. That was a good one for us and I think it really showed the girls. They can see the end in sight now. They’re getting pretty excited.”

With their two State wins, the 2010 Lady Hornets have already advanced further than any previous Bryant High School soccer team. Now 17-7, they’ve also surpassed the previous Lady Hornets’ record for wins in a season, topping the 16 wins of the 2000 team. 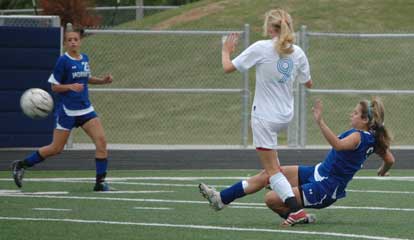 “The whole thing going into Friday night was just to make history,” Long mentioned. “We knew if we won that game, it set the record for most wins in a season and it also be the first (Bryant) girls team to go past the first round in Class 7A. So once they’d done that, though, they said, ‘Coach, we’re not satisfied with just that.’ They’re determined. Hopefully, that determination continues. But whatever happens from here, I’m still going to be proud of them.” 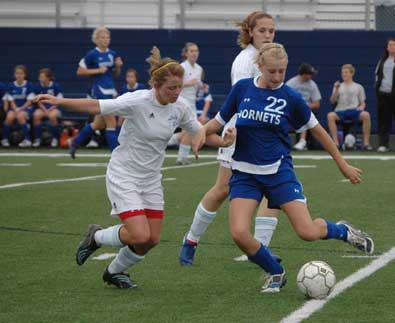 Almost entirely underclassmen, the Lady Hornets’ winning PK’s were knocked in by sophomore London Abernathy on Friday and freshman McKenzie Adams on Saturday. For Adams, whose defense was a key to the game as well, it was the first time all year she’d even participated in a shootout.

In the first shootout, each team got five penalty kicks and neither gained an advantage. Both made four of five. For Bryant, Katie Moore matched Southside’s first goal. After the second Lady Rebel missed, Lauren Reed booted one into the net to give Bryant an edge. The third round, however, Southside made and Bryant didn’t as it evened up again.

They traded goals after that with Lexie Balisterri countering Southside’s success on the fourth attempt then Abernathy matching the Lady Rebels’ goal on the fifth try.

In the second shootout, it went to one-to-one. 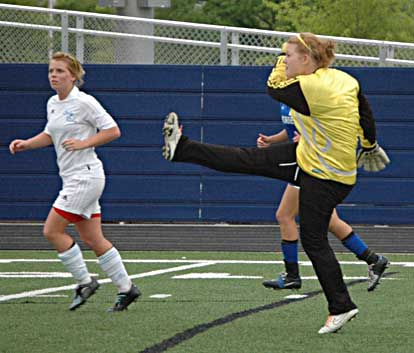 “Normally, I don’t do this but I switched it up,” Long related. “Because McKenzie was feeling it. I could tell she was. She’d just played awesome. She was like, ‘Coach, I’m ready to do this.’ So, their player missed and Kenzie took the next shot and she finished the game.”

Long admitted that calling on Adams was somewhat out of the blue. “It was. I mean, she was walking out there and she was like, ‘Coach, I’ve got this. I’m confident.’ And all the other girls were kind of nervous. I could tell. My first five are pretty solid. But all the other girls were like, ‘Oh, my gosh . . . ‘ Kenzie was just filling in. She took the shot and she made it.”

The teams had played to a 1-1 deadlock in regulation. Southside took the lead early on a goal by Ashley Cochran.

“They scored in like the first 10 minutes,” Long related. “And, when they scored, they had this one girl (Cochran) up top that, I mean, she was really good. So, I put McKenzie on her, man-marked her the rest of the game. She kind of took her out of the game.

“After that, we kind of controlled it,” added the coach.

The Lady Hornets tied it late in the first half on a goal by junior Tarra Hendricks off an assist by sophomore Maggie Hart who played the ball across.

Though they out-possessed the Lady Rebels, the Bryant girls were unable to snap the tie as the game went into overtime.

“In overtime, it wasn’t scary because we kept the ball on our end,” Long related. 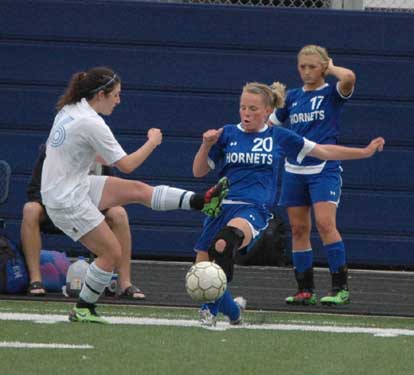 There was adversity, however. The Lady Hornets lost the services of Hendricks with about 30 minutes left in the contest when she picked up two yellow cards. The second of those was the equivalent of a red card and she was through for the game. She’ll also miss the Fayetteville contest.

“But the girls still stepped up and played without her,” Long said. “We played 50 minutes without her. The girls know when they have to step up and I’ve got some that are more than willing to do it.”

On Friday, thunderstorms caused delays along the way and Bryant’s 7 p.m. scheduled start against Har-Ber was pushed back until 8:30. Through regulations and the overtimes, the game was scoreless.

Ironically, the lone Lady Hornets’ shootout loss this season was against Har-Ber back on March 6 in the Northwest Arkansas Invitational in Bentonville.

“The girls out-played Har-Ber the entire game,” Long related. “We were just peppering their keeper, shot after shot after shot. I think during regulation, not including overtime, we out-shot them like 18 to 2. So I was never nervous during the game they were going to score because they were never in our half. It was just that we couldn’t score.”

And, again, the shootout initially didn’t go as smoothly as they had at other times.

Out of the five PK’s in the first round of the shootout, Bryant made just two. Katie Moore got the first one in then after two misses, Balisterri got one to go.

Fortunately, Har-Ber fared no better. Both teams missed on the fifth try.

In the second round, Har-Ber went first and missed again, setting up Abernathy’s dramatic game-winner. 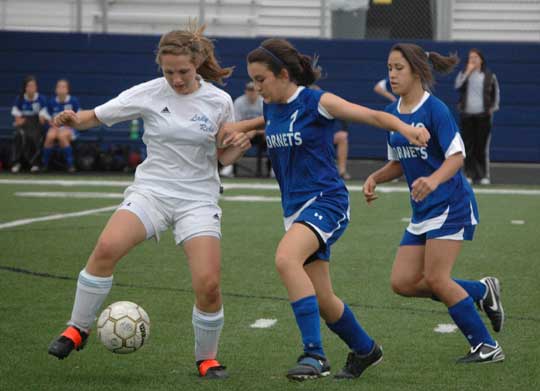 No game, but Lady Hornets’ seniors still celebrated
May 2 in Bryant athletic history: 2017