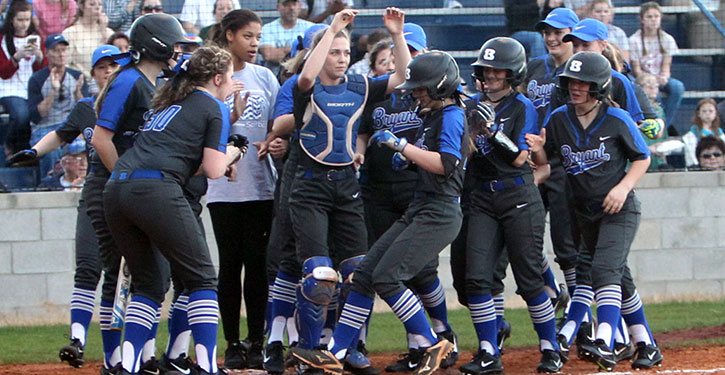 In 2017, the Bryant Lady Hornets rolled through the 7A-Central Conference undefeated, 14-0, and, at 28-5 overall (just two losses to Arkansas teams), appeared destined to play for a State championship. Their league victories included a sweep of rival North Little Rock, 6-2 and 6-3.

But, in a stunning conclusion, those same Lady Charging Wildcats won the third meeting in the semifinals of the 7A State Tournament in Fayetteville, 17-9.

The unexpected loss has simmered with the team all off season and, with almost all of the players from last year’s team returning, the team’s determination, particularly among the seniors, to play for a championship this spring is palpable.

“I don’t want them to think of that as added pressure,” said Lady Hornets head coach Lisa Dreher. “I think it’s just something that has to get done. It’s something that none of us has checked off our list. That group knows this is it for them and they’ve gone all out in practice and I think that’s key. It gives us a better chance for sure.

“I do feel good,” she noted. “I do think there is pressure. There’s expectations with that group but there should be. I think they’ll rise to the occasion. We’ve dissected last year until we can’t anymore. We don’t want to make the same mistake and we don’t want the same outcome.

“I’ve definitely critiqued myself as a coach that game and a lot of games,” Dreher related. “(North Little Rock) got super-hot right at the right time. I’d never seen them hit like that and I don’t think they had hit like that all year. They were hitting good pitches. It didn’t matter if it was G (Gianni Hulett), Raven (Loveless), whatever. They were hitting it and I know the ball was moving. They just got hot. And that happens sometimes in a single-elimination State tournament.”

Both Hulett, a sophomore, and Loveless, a senior, return. They’re both such quality pitchers that Dreher used them in tandem last year to great effect, each pitching an inning or two, giving way to the other, then returning.

“We probably will at least start out with the rotation like we did last year,” she said. “In that, it shifts the defense. It gets more players in.

“We still have some open positions,” the coach continued. “We have a few people that can play anywhere so we do have options, but I’d like to get it settled a little bit to see what goes best for the team.

“But it’s hard to say, black and white, a solid defense, one through nine, because it is going to change,” she added. “They know that. I think, after last year, they have a better understanding of that. The concept of team is really important for them to understand.”

The starting outfield will come from Regan Ryan, Regan Keesee, Maddie Stephens and Hulett. Meagan Chism returns as the catcher.

On the infield, Brooklyn Trammell will be at first with Sarah Evans switching to shortstop.

“She stepped into the role really well,” Dreher said of Evans. “I needed her to be more vocal and she’s doing that. Hopefully, everybody else will follow that. She’s really taken the time to study the position and understand, so everything would flow.”

The competition for playing time at second and third is among Bella Herring, Aly Bowers, Maddie Thompson and Alissa Suarez.

“One thing that we still need to improve on is communication. We have some strong voices on the team. They all have to trust each other and work on that. It starts right now, building that trust. It has to be flawless.”

There is little doubt about the team’s ability to score runs. They have power and speed and they hit for average. Evans, Chism, Ryan and Loveless all hit over .400. Evans’ slugging percentage was .883. Chism’s was .724 and Hulett’s was .659.

Trammell, Stephens, Ryan, Loveless, Keesee, Evans and Callie Bradley are the seniors on the team. Juniors include Chism, Bowers, Hennessae Shavers and Alexis Helton. Along with Hulett, the sophomores are Thompson, Hannah Work, Joely Calhoun, Arryonnah Briggs, Haleigh Beck and Avari Allen. Suarez is a freshman as is Herring, Kynzi Powell and Samantha Still.

The Lady Hornets host a benefit scrimmage on Tuesday, Feb. 27, against Sylvan Hills, with catfish dinners from Riverside Grocery available as a fundraiser for the team. Game starts at 5 p.m. They’ll officially open the 2018 season on Thursday, March 1, against Lake Hamilton.

For the full schedule, go here

Game, dinner hosted by Lady Hornets postponed to Tuesday, Feb. 27
“Great Wall of Jad’n” will be relocating to Harding next fall