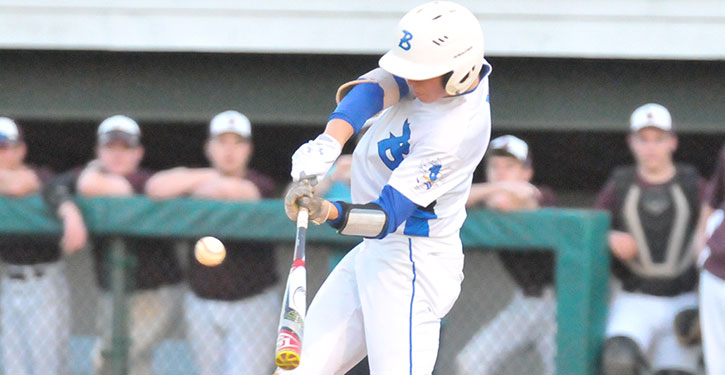 With just five seniors and a head coaching change, the Bryant Hornets went into the 2017 baseball season with plenty of question marks, despite the fact they had just won their fourth State championship in seven years.

There were doubts. Some even feared that the team wouldn’t qualify for State for the first time since 2006.

Kirk Bock had done so much for the program in leading the Hornets to those four titles, could Travis Queck, even though he was Bock’s top assistant, be able to continue the tradition in his first head-coaching assignment?

Well, the Hornets not only made the tournament but made it all the way to the Class 7A semifinals before running out of pitching and losing to Cabot — a game away from playing for the title again.

There was no letdown with Queck, pitching coach Stephen Tharp and new assistant Guy Brown — a Bock protégé in Harrison — leading the way. And the strong tradition of winning continued.

On Tuesday, the Hornets get their first taste of action in the 2018 season when they play at Lake Hamilton (weather permitting) in a pre-season scrimmage to benefit the Arkansas Activities Association catastrophic injury insurance program.

In that final game against Cabot, the Hornets had three sophomores in the middle of the lineup, Jake Wright, Logan Chambers and Coby Greiner who combined to go 8 for 9 at the plate. And their return is among the reasons Queck is hopeful about the coming season.

It’s cautious optimism from the coach.

“We’re young,” he noted, “extremely young. We have 13 juniors or seniors. Everybody else is a sophomore or freshman. That’s good for the future, just scary right now. I’m going to rely a lot upon the upper classmen to lead by example, to show the younger kids how things are done.

“But I like them,” the coach asserted. “I’m excited about the freshmen. I’m seeing some sophomores make some hay. The junior class has been solid since they’ve been here. We’re just trying to continue to push buttons to get more. The senior class has just been steady, solid.

“These guys buy into what we’re doing,” Queck mentioned. “I think they’re eager to learn, eager to please. Sometimes you want them to worry less about pleasing and just go play baseball because it becomes something in your head that just paralyzes you.

“There’s no doubt these guys work hard,” he continued. “Even though I may push buttons to try to get more, that’s just what I’ve got to do. But these guys put in the effort day in and day out. I think it’s their time.

“Some sophomores last year (now juniors) got a lot of playing time last year. They kind of got thrown into the mix. And it’s going to benefit us this year. Some seniors were also in that. And they produced last year. Now, if we can just step up to the challenge of doing it again, asking more out of ourselves.”

To add to that, those guys and others, including junior right-hander Will McEntire shined for the Bryant Black Sox Senior American Legion team that made it all the way to the Legion World Series.

Still, Queck’s primary concern will be pitching. Not that he doesn’t have any; 18 of the 24 players on his roster are listed as pitchers.

“We don’t have anybody that’s going to flash,” he continued. “We don’t have people just knocking down the door. But we’ve got guys that can go out there and compete. They have stuff that can win a lot of ballgames.

“Our success this year will rely on them figuring that out and taking ownership of what they do,” Queck said. “Coach Tharp and Coach Brown and me — we spend a lot of time trying to figure out how to help these kids be the best they can be, and be successful in the situations that we put them in. When they start to do that, the sky’s the limit for some of these kids.”

Individually, the coach mentioned, “Will McEntire, last summer, watching him compete at State, Regional and World Series for the Legion team — that’s what Will can do. Just watching him, there’s a mentality about him. If he can rediscover that mentality and reach down and get it then the sky’s the limit for him. He reminds me a lot of (former State tourney MVP) Nate Rutherford. So, I’m eager to see him.”

McEntire was 2-2 in high school last spring with a 3.00 earned run average over 23 1/3 innings. He fanned 23 but walked 16. In the summer, however, he was 5-0 for the Black Sox with a 1.26 ERA, with 23 strikeouts and just 10 walks in 33 1/3 innings. He pitched a complete game in the State title victory over Texarkana, won at Regionals in New Orleans and pitched the Sox to one of their victories in the Series.

“The senior class, you’ve got Myers Buck, who hasn’t been given as many opportunities, but we see flashes,” he continued. “We’re like, ‘Man, this could be good,’ when we watch him pitch.”

Buck pitched just 6 1/3 innings for the varsity in high school but earned considerable success during the summer going 7-1 with a 2.55 ERA.

“Scott Schmidt’s just a fun-loving ballplayer,” Queck said. “He’s going to go compete every time. We’ve kind of had to make him a pitcher. We’ve done some things with Coby Greiner to hopefully make him more successful.”

Greiner got in 16 1/3 innings as a sophomore with a 2-1 record in the spring. Schmidt, a side-winder who will start at second for the Hornets, pitched sparingly in both high school and Legion but, over 14 1/3 innings, did not allow a run.

“Jake Wright is our catcher and we feel very confident with him behind the plate, which is the issue,” Queck said. “Because we don’t want to take him, after throwing 100 ‘pitches’ back to the pitcher and put him on the bump or vice versa or have to throw him the next day. One, we’re not going to put a kid at risk. Using him strategically and with Cade as the back-up catcher — he’ll also see some DH time. He’s a guy that can do some things too. We’ve just got to see some consistency out of him.
“I’m also eager to see (freshmen) Austin Ledbetter and Aiden Adams, along with the development of Kannon Allison, Jackson Lindsey and the younger guys that have some ability,” he related. “We just need to see some maturation, of all types.

“We’ve got some guys in the sophomore group that will get some innings,” the coach noted.

Taking it around the horn, Queck said, “At first, we’ve got senior Brandon Hoover. He’s locked it down. Peyton Dillon is a sophomore. Both of those guys — I love their approach at the plate.

“Defensively, I just feel a little bit more confident with Brandon,” he noted. “Peyton’s making strides. We’ve got the freshman Aiden Adams, who’s just moving in from basketball. He’s got a ways to go as far as learning what we do but I think he’s going to be effective there.

“At second base, there’s Scott Schmidt and freshman Noah Davis with Logan Catton working in there,” Queck continued. “At short, it’ll be Austin Ledbetter or Coby Greiner, whoever figures it out in the next week and what can put us in the best situation to win.

“At third base, Logan Chambers is — I couldn’t ask any more from someone in owning leadership,” the coach emphasized. “That guy has taken it upon himself to not only be another set of eyes and ears for me over there and communicating with some younger guys and trying to teach and all that, he has really challenged himself this off-season in the weight room, working on our approach with what he can do with it.

“And his ability to field — there were times with question marks last year,” he added. “Of course, he played first base for us last year. We thought he looked natural at third base. There was one day, I turned around and said, ‘This guy may have to play short.’ He’s been that much of a leader and, defensively, he’s taken that big a stride. The thing is, he’s a constant, day in and day out.

“Behind him, right now, would be Logan Catton, who’s another guy I can’t speak highly enough about,” Queck continued. “I mean, here’s a guy that’s a program guy, that does everything we ask him to do. If Scott comes in (to pitch), I have no hesitation putting him in at second. I have no problem putting Logan anywhere on the infield because I know what I’m going to get in effort and attitude. And, the thing is, Logan’s put himself in a position to be successful at those positions.

“The outfield situation is kind of — there’s about six guys I’m looking at, just trying to figure it out,” he related. “In left field, Matt Sandidge will start out there, with him possibly playing center field. I’d like to have Coby Greiner in center and Gage Stark in right field. I’m real confident with all three of those guys and the athleticism and the things that they’ve done during the off-season.

“As the DH, Cade Drennan’s really swung the bat well. He will probable get the nod the first game or two. Peyton Dillon at first, when he’s right, when he’s focused — there was a day at practice when I said, ‘This is unreal, what he could do.’ He’s a bigger guy and he can really swing it.”

Surveying the lineup, Queck insisted, “I’m excited about that right there, how that lineup plays out. But, obviously, it’s got to work and if it doesn’t, we’ll make changes. We want to put the best defense we can out there, because we’re asking our pitchers to do a lot of work and they need that behind them.”

That means throwing strikes, he stated.

“The key is pitching. We will go as far as the pitching can take us.”

The Hornets officially open the season on Monday, Feb. 26, at home against Hot Springs Lakeside then travel to Waxahatchie, Texas for a tournament starting Feb. 28. For the complete schedule for 2018, go here.