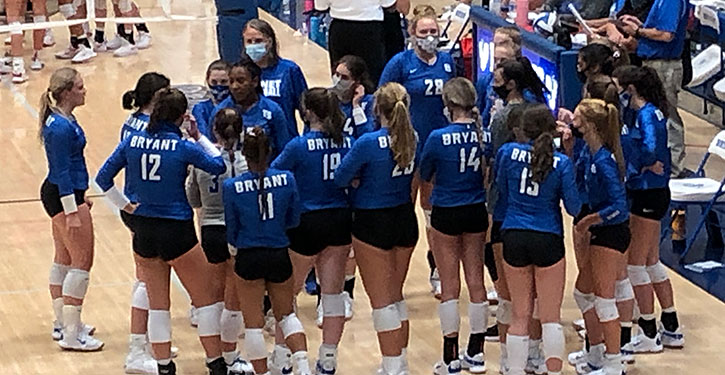 The Bryant Lady Hornets made some progress Thursday night. After wins over Little Rock Central and Little Rock Southwest, head coach Leigh Ann Back still wasn’t quite satisfied with the team’s focus and calm. She asserted that some hard work would need to be done before the next few matches.

And the Lady Hornets put in that work. As a result, they came within a handful of plays at the end of the second and third set from knocking off the first-place Cabot Lady Panthers at the Hornets’ Nest.

“I think that was our best match, our best effort, this season so far,” she stated. “The first set we came out very calm and very confident. But, as the match went along, we started to get a little bit more frantic.

“I always tell the girls, the way that they should react, when they need to start panicking, look at me. If I’m panicking, then that’s the time to panic. But, if not, don’t worry about it. They panicked a little bit tonight.”

Bryant had 32 kills and 10 blocks in the contest. Ella Reynolds led with 12 kills. Sammie Jo Ferguson had eight, Madelyn Hoskins five and Lily Settle four. Jacie Gilbert contributed two kills and Camryn Martin had one. Hoskins and Ferguson each had three blocks, Gilbert two with Settle and Martin getting one apiece.

Bryant was good on 93 percent of its serves. Jaiyah Jackson was good on 22 of 23 with three aces. All 18 of Shaylee Carver’s serves were in. She had two aces. Hoskins had an ace as she went 9 of 10 at the service line.

Carver had 17 assists and Lily Studdard 15.

Samantha Still led the team with 23 digs. Reynolds and Jackson had 13 each, Hoskins five and Carver four. Ferguson, Studdard, Settle and Martin had three apiece.

The first three sets were tight throughout. Cabot led only briefly in the first set. The Lady Panthers had managed a 14-13 edge, but the Lady Hornets forced a side-out and, with Jackson at the service line, went on a roll. She had two of her aces during that stretch in which Bryant built a 19-14 advantage, forcing a Cabot timeout.

Though the Lady Panthers returned and forced a side-out, they did not control the ball for long. With Hoskins serving and Reynolds providing a pair of kills, the Lady Hornets pushed out to a 24-16 lead, punctuated by Hoskins’ ace.

Cabot started to rally but with it 24-18, Reynolds nailed a kill then hopped with glee into the huddle with her teammates.

The second set was similar, though Cabot went on a run that produced a 10-4 lead. Hoskins broke serve with a kill and Jackson again rotated into service. Her third ace, a block with Hoskins and Gilbert both on the ball, and a pair of Cabot errors had the lead whittled down to 10-9. The Lady Panthers took a timeout.

Though Cabot kept the upper hand, the Lady Hornets would not go away. They eventually tied it at 18 on an ace by Carver. A pair of Lady Panther hitting errors plus another ace pushed the Lady Hornets to a 22-18 lead.

On another kill by Reynolds a little later, the Lady Hornets led 24-22, just a point away from winning the set. But Cabot closed with a flurry and won 26-24.

The disappointment of that tough loss may have had something to do with the fact that Cabot went on a 5-1 run to start the third set.

But the Lady Hornets re-energized and rallied to tie 6-6. It was 7-7 when Hoskins forced a side-out with a kill. A Cabot hitting error put Bryant in the lead. A tipped block by Settle made it 9-7.

Again, however, the Lady Panthers rallied and eventually led 16-12. A net violation cost them control of the serve and eventually Bryant pulled even 20-20 with the help of kills from Ferguson, Settle, Hoskins and Gilbert.

With Carver serving, Bryant took the lead on a block by Hoskins and Cabot called timeout.

But a hitting error tied it then a block and a tip provided the winning margin for the Lady Panthers, 25-23.

Again, Cabot got off to a good start in the fourth set. It was 12-4 before the Lady Hornets got it going with kills by Reynolds and Gilbert and an ace from Jackson. A long hotly contested volley followed, and the Lady Panthers wound up with a hitting error as the gap closed to 12-9.

Another surge by Cabot had the advantage up to 19-12. It got to with a point of match point at 24-17 but Bryant battled back to 24-21 before a hitting error provided the final Cabot point.

The Lady Hornets will play at North Little Rock on Tuesday, Sept. 22, then host Conway on Thursday, Sept. 24.

Conway is co-leader with Cabot. North Little Rock is just ahead of the Lady Hornets in the standings at 2-2. The Lady Hornets fell to 2-3 in league play on Thursday.